These are a few of my favorite things on Lake Winnipesaukee 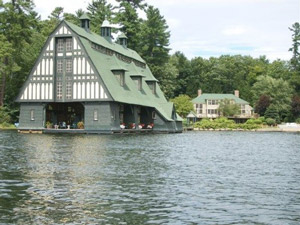 While I’m out on vacation this week I will most likely be enjoying the some of the sights on Lake Winnipesaukee. There are a few things I always look forward to seeing every summer while we are out-and-about on the boat.

First is the Swallow Boathouse; it is an amazing piece of architecture. It’s a true landmark on the lake that can transform you to a different time. Originally the structure was part of Kona Farm, which was purchased by Hebert Dumaresq in the early 1900’s. The Swallow Boathouse was the second of three boathouses built and was designed to house a 63.11 ft. steam yacht named the Swallow.

The boathouse is 45 ft. high, with double doors that fold inward. These folding doors would have accommodated the massive masts on the Swallow steam yacht. The Swallow Boathouse has been a part of the Windward Harbor Condominium Community in Moultonborough, NH since the 1980’s.

My next favorite place in the lake is Becky’s Garden. It may not be the largest island, but it is the cutest and it’s the smallest charted island in the lake. I anticipate the arrival of the little house they place on the island every year. Sorry folks, you can’t rent this one for the summer—but you can get pretty close to it with a kayak or jet ski. You can get a pretty good look at it from your boat too, but be careful because it is a bit rocky. 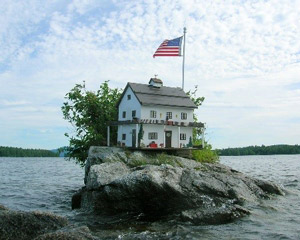 The story behind Becky’s Garden is pretty special. It is said that a settler of Center Harbor, NH had a couple of daughters; all were spoiled except for one, Rebecca. She was genuine and a talented gardener. She had grown and maintained beautiful gardens surrounding her father’s farm. However, one day their cattle escaped but before they did they trampled her beautiful gardens. Her father felt terrible about the damage and offered Rebecca an island of her choice. Her spoiled sisters were jealous that she got first dibs of the islands and so not to upset them further Becky chose the smallest island. A wealthy farmer heard of the unselfish daughter and he sought after her and after a while they were married. It was thought that Becky’s Garden, though the tiniest of islands, offered the greatest results.

So if you are planning a summer trip, and like history and folklore, be sure to head to Lake Winnipesaukee. It is definitely worth the trip to check out these two spots on the big lake and learn a bit of local culture.