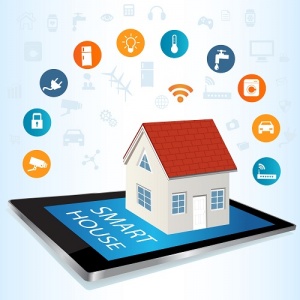 The industry for so-called smart homes will reach $71 billion by 2018, according to a Juniper Research report published in February 2015.  Initially, smart homes and related products were driven mostly by entertainment systems, smart appliances and phone apps.  Often these purchase initiatives translate into safety and energy efficient systems that increasingly play a bigger role in the homes we purchase.

Most home owners unwittingly add one component at a time.  However, by definition, a smart home typically has computers, televisions, lighting, heating-ventilation-air conditioning, and home security systems, among other elements, linked to a centrally-controlled network.

You may have considered or have elements of a smart home in daily use already.  The question is, “Are these devices changing appraisals upwards?” And just what exactly constitutes mainstream smart home technology?  Maybe it’s best that we take a stroll through the increasingly interconnected house first.

A recent survey conducted of U.S. adults in advance of the 2016 Computer Electronic Show revealed that homeowners are willing to pay extra to "smart stage" their home.  More than half of homeowners (54%) were willing to purchase or install a smart home product, as they believed it would make their home sell faster.

Of Millennial homeowners (ages 18 to 34) who would purchase or install smart home products, 72% would pay $1,500 or more and 44% would pay $3,000 or more to make their home smart.  And with this group, now emerging as the predominant new homebuyers, and with their willingness to invest in technology, there will be an increasing interest in these features and their worth.  Clearly investments in the “smart” category are likely to influence buying decisions and eventually valuations.

Typically, three systems need to be in a home for it to be considered "smart.”  The top choices are security (locks and alarm systems - 63%), temperature (thermostats and fans - 63%), lighting (light bulbs/lighting systems - 58%) and safety (fire/carbon monoxide detectors and nightlights - 56%).  Generally speaking, smart home technology kind of creeps in the front door through your entertainment systems first, along with smart phones, TVs and speakers.

According to the survey, 43% of Americans with smart home products are Millennials aged 18-34, 33% are ages 35-54, and 24% are 55+.   So, across today’s buying spectrum, we have large groups interested in smart home technology.  Furthermore, a recent study of buyers’ trends by the National Association of Realtors shows that this next buying generation represents the largest share of potential homebuyers.  Hence, this is a market you don’t want to ignore.

With this surge in interest, home appraisers, buyers and sellers are going to have to take a more significant interest in smart homes and their related value. For now, the consensus among industry pundits is that it’s a relative unknown as to how best to calculate value.  Frankly, the industry has grown so fast that it’s hard to quantify how much this kind of technology plays a part in the market. Homebuyers who find such technology important are more likely to have enough cash to install their own devices.

The relative newness of this wired-home world means appraisers don’t have much to go on when determining connectivity’s added value. In an overview article on the subject of smart homes by Broderick Perkins, the author interviewed a range of key industry leaders, among them Randy Roberston, an investigator with the Alabama Real Estate Appraisers Board in Montgomery, Ala.

“I think you (homeowners) will enjoy a difference in marketing times,” said Robertson. “If you are building, it could equate to an increase in profit, but we don’t have enough historical data to do a comparable analysis”.  While he expressed this view several years ago, his comments, in my opinion, still hold true today.

Connectivity can add to the desirability of a home for some prospective buyers, which can make it a good marketing tool. But as an investment, it remains hard to quantify.