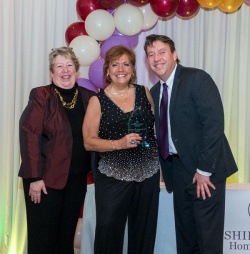 Berkshire Hathaway HomeServices Verani Realty recently named its Concord location its 2016 Office of the Year and named Team Dunn/Andrews/Kelleher, made up of April Dunn, Joanie Andrews, and Derek Kelleher of the Concord office their #1 top producing team of 2016. The Office of the Year is awarded to the Verani Realty location that achieves the highest percentage of its gross commission income (GCI) goal for the year.

The awards were given during the annual Ozzie awards, which honor the company’s founder, Osvaldo Verani (nicknamed “Ozzie”) and recognize agents, teams and offices who have achieved a high performance level as determined by gross commission income (GCI).

“April, Joanie and Derek are highly recognized and respected throughout their market area,” said Margherita Verani, CEO of Verani Realty. “Their dedication and commitment to their clients and customers is evident in their growing success and the fact that they have won this award twice in a row. We’re proud to have them as part of the Verani family.”

Team Dunn/Andrews/Kelleher started nearly two decades ago as a customer focused mother-daughter team between April Dunn and Joanie Andrews, who were former owners of Heart and Homes Realty. Derek Kelleher joined the team in the spring of 2016. The hallmark of their business is putting the customer as number one and listening to their needs. This is the second year in a row the team has been named Verani’s #1 team.

The Concord office has 34 agents and handles a wide variety of real estate transactions, including waterfront properties in the Lakes Region. The office has a successful track record and achieved Office the Year three previous times in 2007, 2012 and 2013. It also is a regular recipient of the Berkshire Hathaway HomeServices Roundtable Award, which recognizes the top three offices for total residential units in the Northeast. The Concord office is located at 143 North Main Street in Concord and can be reached at 603-224- 0700.

“I’ve always told my folks that if they focus on great customer service, productivity will follow,” said Kathy Lee, manager of the Concord office. “This award is the result of committed and dedicated agents working hard for their clients and customers, and it has motivated them going into 2017.” 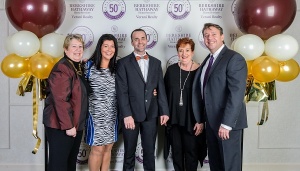 Dunn specializes in residential real estate in the Concord area and knows the area well as a lifelong resident. She is active in the real estate community and knowledgeable of the changes in the industry that impact her clients. She is a member of the Capitol Region Board of REALTORS and has served as a director and on various committees. She also has made an appearance on HGTV’s popular program House Hunters.

Andrews is a resident of Concord and has been a licensed real estate professional since 1987. She is E-certified. In her spare time she enjoys dancing, traveling, and spending summers in Laconia with her husband.

Kelleher is a licensed real estate professional and is currently a captain with the Concord Fire Department. He has more than 20 years’ experience in the fire service, extensive training the medical, fire and rescue fields, and more than 14 years’ experience teaching at the NH Fire Academy, where he currently is a senior staff instructor. Active in his community, he is a high school football official and has spent his time coaching with community football and softball teams.